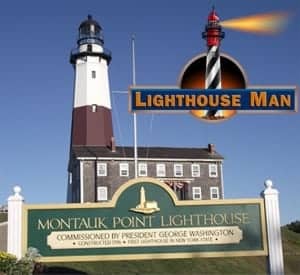 The Montauk Lighthouse is located on the shore of Long Island NY and is adjacent to the Montauk Point State Park. The Montauk lighthouse is an iconic landmark on the easternmost point of Long Island in the town of East Hampton overlooking the Atlantic Ocean. Even more iconic the Montauk Lighthouse was commissioned by our first United States President George Washington in 1796.  Ever since then it has been lighting the coast of New York for over 200 years. In the emerging United States, the port of New York handled a third of the country’s international trade. Named after the Montauk tribe, the Montauk Lighthouse stands proud like its pre-colonial namesakes. The site of the lighthouse was actually lit long before colonization; members of the Montauk tribe used it as a council meeting place, and lit fires to summon dugout canoes to Montauk Point. 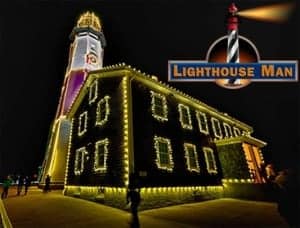 The Montauk lighthouse was operated by hand until 1987 and was originally fueled by whale oil lamps burning at the base of it octagonal tower. At 110.5 ft tall, the lighthouse is imposing, and visitors must climb 137 iron steps to reach the lighthouse top. The tower, however, was once slightly less massive. Until renovation in 1860, it was a more manageable 80 ft. During the renovation, the whale oil lamps were replaced by a 12 foot-high, 10,000 pound Fresnel lens. Shortly after, a fog signal was added and the once stark white and black tower was decorated by a single reddish brown stripe. The lighthouse was electrified in 1940, and in 1987 a new light, this one a shockingly powerful airport beacon, was installed. The current VRB-25 lens can be seen from 18 nautical miles away, and it flashes every 5 seconds. 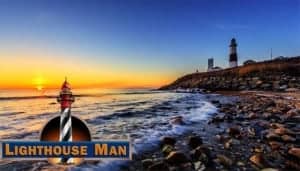 The Montauk Lighthouse is the fourth oldest active lighthouse in the country, and so was recognized as a National Historic Landmark in 2012. This famous lighthouse is operated as a museum by the Montauk Historical Society, and you can climb the tower from March until November. 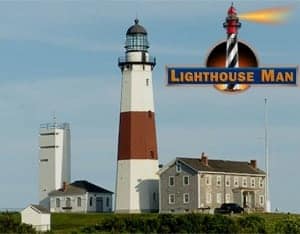 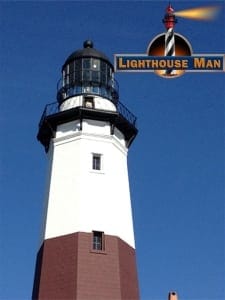 yard!!! We at the Lighthouse Man build authentic outdoor replicas for your lawn or garden with a great attention to detail right down to the trim molding on our 6-panel door. We as always do extensive research to ensure that our replicas are built to our outdoor ornamental scale, with authentic paint colors. We even have real authentic custom built corbels two tier catwalks and windows with real curtains and detailed moldings. Customer satisfaction is of the utmost importance to the Lighthouse Man, and so we offer a variety of options to allow enthusiasts to find the perfect replica in their price range. The Lighthouse Man is the Leading manufacturer of outdoor authentic custom crafted lawn lighthouses. We assure you that our Montauk lighthouse will transform your yard into the Montauk Point – complete with rich history and architectural prowess. Please try us out today and see what all of our customers have said our lawn and garden lighthouses.

10 Interesting Facts you might not know about the Montauk Lighthouse:

2) It is the1st Lighthouse in the state of New York

3) The Foundation of the Montauk Lighthouse is 13′ deep

6) The current lens can be seen from 18 Nautical Miles

8) The walls at the base of the lighthouse are over 6′ think.