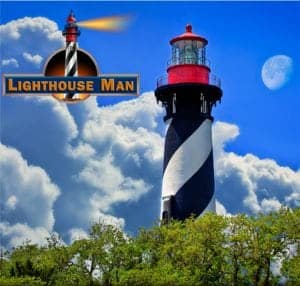 The St. Augustine Lighthouse is perhaps one of the most fascinating lighthouses in America.  Many even say that this lighthouse is haunted.  There have been several reported sightings of ghosts that are attached to this lighthouse. The first of these ghost sightings goes back to the original owner who is believed to have never left the property. The original owner of the lighthouse was Dr. Allan Ballard who built the lighthouse in 1824. According to historical documents, Ballard was forced to sell the lighthouse to the government in 1865. The belief was that the ocean would swallow the existing lighthouse. Ballard refused and was approached again after the Civil War. Florida’s funds were severely depleted after the Civil War and so they offered Ballard a price that was sorely under market value. The government threatened to take the lighthouse through eminent domain if Ballard refused to sell the property. He refused and swore to never leave. It is believed that his ghost remains on the property to this day. Several other ghosts roam the property of the lighthouse including several lighthouse keepers and two children of a lighthouse keeper. More than one visitor to the famous St. Augustine Lighthouse has claimed to either seen ghosts, smelled cigar smoke from a former keeper, or heard the laughter of the two daughters. 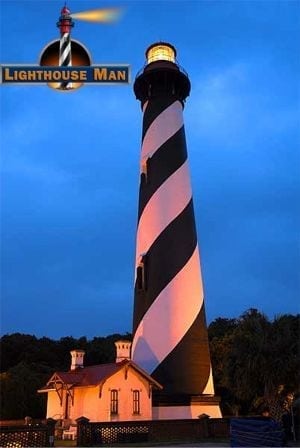 The St. Augustine Lighthouse is thought to have been erected out of a series of wooden watchtowers of Spanish descent in the early 1500’s. The lighthouse is the oldest, permanent aid to navigation in North America and Florida’s first lighthouse. According to archival maps and documents, it is suggested that flames of some design were used as the original light in the watchtowers to aid in navigation. It wasn’t until May of 1824 that the 1st. official light was lit in one of the original coquina structures by Florida’s territorial government.

By 1870, soil erosion threatened the old watchtower forced Congress to step in and set aside $100,000 for the construction of a new tower. The construction of the new tower began in 1871 and was completed 3 years later. Materials such as Brick from Alabama and iron from Philadelphia were brought to Florida to build the new tower. Along with the brick and iron, a 9 ft. tall, hand-blown Fresnel lens was brought from Paris, France. The lens itself is made up of 370 hand-cut glass prisms arranged in a beehive design and is 6 ft. in diameter. William Russell, the head light keeper at that time, installed and lit the lens in October of 1874. The Fresnel lens in the St. Augustine Lighthouse is one of a few lenses still in operation in the United States today. The sea did claim the old tower in 1880, while it was being manned by retired Army Brev. Major William Harn, whose battles included Fort Sumter and Gettysburg. 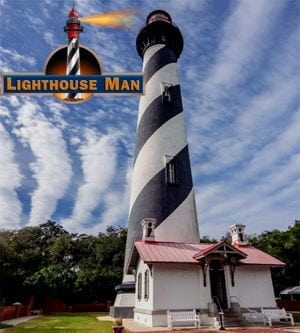 The lighthouse is the oldest surviving brick structure in St. Augustine, Florida. As of 1888, the lighthouse was restored to its colors and materials used during this era. There was a brick light keeper’s house added to the property in 1876. This addition housed two families and a younger, single assistant keeper to remain on site and monitor the tower. Brick summer kitchens were also added in 1886. The lighthouse keepers and their assistants lived and worked on the property until the Lighthouse was made fully automated in 1955.

Armed Coastguardsmen fixed jeeps in the garage, lived in small barracks, and stood watch from the top of the tower during WWII. The lighthouse stands 165 ft. above sea level. The original Fresnel lens is still used as the beacon for the lighthouse, but now the unit uses a 1000 watt bulb that is maintained by volunteers of the museum.   It contains 219 steps that visitors to the Lighthouse and Museum climbed daily. The first of the visitors began arriving in 1910 when more than 10,000 people made their way to visit the St. Augustine Lighthouse and Museum. 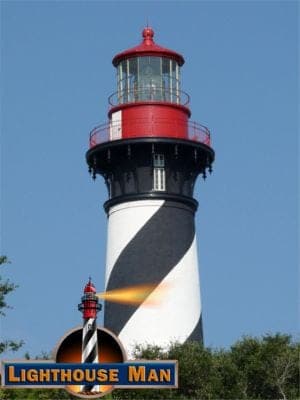 The St. Augustine Lighthouse has had its share of destruction over the years. After vandals torched the lighthouse and left it gutted, a group of 16 volunteers began a 15 year campaign to restore the lighthouse in 1980. The group, known as the Junior Service League of St. Augustine Inc, worked tirelessly to get the community to help with the restoration. The Coast guard stepped up and offered the assistance of Joe Cocking and Nick Johnston to help restore the Fresnel lens after a vandal’s bullet almost destroyed the light. This was the first Fresnel lens restoration ever performed. The near destruction of the lighthouse caused the community of St. Augustine to pull together to save the light as well as the lighthouse. The Maritime Museum opened in 1988 on the property of the lighthouse. It was only opened part-time and was maintained by volunteers. It opened full-time in 1994 and by 1998 it was changed into a not for profit operation that was known for its educational camps, community outreach programs, support of at-risk children, and maritime archaeology programs that focus on shipwrecks in the St. Augustine Port. The mission of the St. Augustine Lighthouse and Maritime Museum is history, education, and community service.

The not-for-profit lighthouse and museum are supported by admission to the museum and lighthouse, store sales from the shops on the museum grounds, donations, and membership fees. More than 300,000 services are donated to the community each year by way of the lighthouse and maritime museum to support local charities and other organizations.

The deed to the Lighthouse was transferred from the Coastguard to the St. Augustine, Lighthouse and Museum Inc. in 2002 through a pilot program of the National Lighthouse Preservation Act of 2000. The Coastguard was assisted in this endeavor by the National Park Service and General Services Administration. The Museum was presented a National Trust award for Historic Preservation in recognition of their work in helping to transfer lighthouses to non-profits. The Coastguard also turned over the Fresnel lens to the Museum who operates it as a private aid to navigation and keeps the light shining continually.

Our Custom Crafted St. Augustine Lighthouse Lawn Ornaments may not have ghosts that haunt them, but they would make an excellent landmark in your yard or garden where your family can create their own stories and memories for generations to come. The Lighthouse Man is the leading manufacturer of authentic lighthouse outdoor replicas.  We take great pride in our lighthouses and we will help you create the lighthouse of your dreams.  Please take a moment and visit us at lighthouseman.com and see what we have to offer.  Remember the Lighthouse Man is your one stop shop for all of your lighthouse and lawn ornament needs.