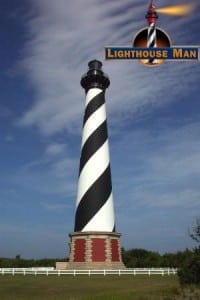 The Cape Hatteras Lighthouse can be found on Cape Hatteras Island located on the Outer Banks in North Carolina. Cape Hatteras Island is part of the Cape Hatteras National Seashore. This has always been a very frequently travelled route by ships throughout history with an ominous nickname. This particular route is referred to as “the graveyard of the Atlantic” due to the large number of vessels that have run aground because the shifting sandbars that are created by the Gulf Stream and the colder water of the Labrador current. One of the most famous ships to run aground near Cape Hatteras Island is the Civil Warship, USS Monitor. In order to address this problem, Congress authorized the building of a lighthouse near the shoreline.

The building of the lighthouses was initially placed under the discretion of local authorities, the US Navy and mariners using the waterways determined that there needed to be a better system for the construction of needed lighthouses along the sea lanes. The United States Lighthouse Board was created as a Federal Agency and placed under the direction of the Treasury Department. Congress appropriated another $80,000 for the construction of a new beacon for the Cape Hatteras Lighthouse in 1868. The new board worked with Naval Officers to determine where lighthouse were needed and then worked with the Army Engineers to build the lighthouses. Civilian scientists were brought in to help with the new technologies in the beacon and lighting systems.

The new Cape Hatteras Lighthouse was completed in about 2 years at a cost of $167,000. It was tallest brick lighthouse tower in the world at 200feet above ground with the light reflecting 192 feet above the water. Due to its deteriorating condition, the old tower was demolished in 1872. After a lightning strike left cracks in its masonry walls in 1879, a metal rod was added to the construction of the tower that connects to an iron disk that has been sunk into the ground. The candle power in the light went from a minute 27,000 to a whopping 80,000! 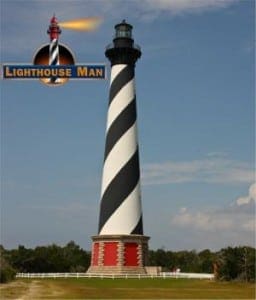 After the completion of the new tower in 1870, the beach where the lighthouse stood was slowly being replaced by the encroaching sea. This was not really a trouble spot until 1935, when the breaking waves finally reached the base of the tower. Each attempt to thwart the erosion of the beach was ineffective and finally abandoned to the National Park Service. The light from the Cape Hatteras Lighthouse was removed and placed inside a skeletal framework farther back on the beach that sat on a sand dune 166 feet above the water and was visible 19 miles out to sea.

In the meantime, the Civilian Conservation Corps and Works Progress Administration began construction on wooden planks that would prevent further erosion of the beach where the lighthouse stood. It was then used as a lookout station by the Coast Guard until 1945. By 1950, the tower stood 500-900 feet inland from the sea and was now a viable place for the light to be placed and used. The new light in the tower consisted of a 36 inch rotating beacon with 250,000 candlepower that is similar to those used in aviation and could be seen 20 miles out. Its white light flashing every 7.5 seconds. The steel skeleton remains in case of a future need when the beach erosion can’t be hampered.

The Lighthouse tower is painted with a black and white diagonal stripe resembling that of a barber pole. The Coast Guard installed new lighting equipment in 1950 and still owns and operates the navigational equipment, but the National Park Service now maintains the tower as a historic structure. The Cape Hatteras Lighthouse is the tallest lighthouse in the world. From its base to the top, it stands 208 feet. In order to reach the light that shines 191 feet above the average high water mark, a person must climb 268 steps. There were more than 1,250,000 bricks used to construct the base and the lighthouse keeper’s quarters.

Due to beach erosion, the second tower was relocated to higher ground in 1999. The Cape Hatteras Lighthouse was moved 2900 feet inland and 1500 feet from the shoreline. At the time of the move, the lighthouse was only 15 feet from the ocean’s edge and in immediate danger. A company from Buffalo New York was given the contract to move the lighthouse and so The International Chimney Corps and Expert House Movers along with a few other contractors completed the lighthouse move September 14, 1999. It was known as “the move of the millennium.” 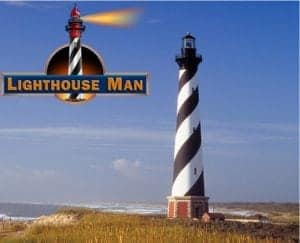 The Cape Hatteras Lighthouse is by far the most popular selling lighthouse here at lighthouseman.com. We take pride in every stucco body construction and building of the Cape Hatteras Lighthouse at our facility in Lewisburg, Pa. The meat is in the details of our barbershop pole paint job, the custom crafted windows with glass and curtains, and the highly detailed deluxe top that peaks our Cape Hatteras and other lighthouses to perfection. We take the time to create replicas of many lighthouses from across the greater US. Here at lighthouseman.com, we offer the largest variety of revolving beacons. These lighting systems range anywhere from low wattage to the original fresnel lenses. We even include LED windows that allow a soft light to emanate from your lighthouse.

If the black and white color scheme isn’t what you are looking for, we offer custom colors that are available for you to choose from. Our deluxe stucco lighthouses are designed to weather the storms and conditions that Mother Nature throws our way. If you are looking for something authentic to spruce up your lawn, come visit us at lighthouseman.com. We have the Cape Hatteras Lighthouse as well as many other lighthouses that you may enjoy displaying in yard.